In Conversation with Gustav: Episode 2

We continued our monthly series “In Conversation with Gustav” where we invite in an amazing guests to the salon and talk with them on a range of topics!

We spoke with the amazing Robin Kermode discussing ‘How To Feel Confident’. Robin is a highly experienced communication coach and author. He also has a podcast called ‘The Art of Communication’. You can watch the full interview below and also read more knowledge and tips from Robin on feeling confident.

IN CONVERSATION WITH GUSTAV EPISODE 2: CONFIDENCE 🌟 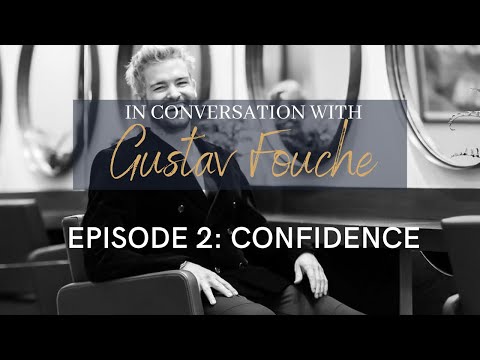 HOW TO FEEL CONFIDENT

I often ask clients what they think a confident person looks like. They usually say it’s about standing tall, shoulders back with head held high. Some say confident people smile a lot. And that they have a sense of purpose. However, I discovered there is one thing that all confident people are doing physically. If you do this one physical thing, you will look like confident. And if you don’t, you won’t!

At a job interview, for example, rather than speaking too fast, over justifying and saying too much, we will look more confident if we answer a question and then stop talking. I often say to clients, ‘Say it low. Say it slow. Then Stop!’

Sometimes a lack of confidence comes from a previous incident. Maybe your boss said you were a poor presenter, or you’d had a bad flight on an aircraft and now fear flying. But as most of the cells in our body regenerate every seven years, surely we can put the past behind us, and learn to regenerate our minds too. And start again with a clean slate.

Of course, the more you do something, the easier it gets. I feel much less nervous than when I first started. The very first time I stood up in front of an audience was when I was running a drama course for adults. I remember thinking, why would these people want to listen to me at all?! But generally, when we’re giving a speech, we have more experience than the audience does. Otherwise, it would be one of them standing up there, instead of you!

And we should also remember that audiences aren’t usually trying to catch us out. They rarely sit there thinking, ‘I hope this’ll be terrible!’ They want us to be good.

It’s when we are not being present that we appear to lack confidence.

As Lewis Carroll said, ‘I can’t go back to yesterday, because I was a different person then.’ Fear only exists in the future or in the past. In the present there just ‘is’. Senior leaders often say when they have to give the same speech many times, like at Townhalls, after about the fourth time they are even boring themselves with what they’re saying!

Actors face the same challenge in the theatre. It’s all about being in the moment and being present. If a speech goes well the first time, the temptation is to try to recreate it a second time. But, actually, it’s much better to give the speech as if it’s the very first time you’ve ever given it because each time will be different. Each time should be different, so that you’re appropriately present for that particular audience.

Confident people seem to adapt to the unexpected.

This is particularly true in an interview scenario when you’ve carefully planned your answers but their unusual questions seem designed to throw you off course.

We need to adapt to different types of people and situations. Some people just want the top line, some want the detail. Some audiences will love your light-hearted joke, some won’t. Sometimes you will be prepared to give your full 40 minute presentation but they tell you that they’ve only got time for your elevator pitch.

I once saw a man going up to the stage to give a speech and droping all his notecards. He had two choices. He could have shown us his panic, saying under his breath, ‘Agghhhhh, you idiot, you should have numbered them, now they’re all in the wrong order!’ Instead he decided to pause for a moment, then confidently and unapologetically say to the audience, ‘Not a great start, Ladies and Gentleman, as you can see, I’ve dropped my cards. Give me two seconds. In the meantime, why don’t you introduce yourself to your neighbour.’

Stuff happens. Things will always go wrong. It’s how we deal with them that makes us look confident. Or not.

Confident people find their subject matter more interesting than themselves.

The brilliant David Attenborough says he’s genuinely humbled by the Natural World every day. It’s his enthusiasm for this subject that not only makes us want to listen to him, but also makes him look and sound confident.

Confident people don’t seem to have to ‘big themselves up’. They don’t appear to have to prove or to justify.

A touch of humility goes a long way.

When I was 18, my brother and sister had silver tennis cups all over the house from competitions they’d won. I’d never won one! So I decided to go out with my pocket money and buy myself a silver cup. It’s still one of my prize possessions and sits on my mantelpiece today. It stands about 3 inches high. I had it in engraved at the age of 18: ‘THE ROBIN CUP’. Then I realised that I hadn’t said what the cup was for. So now it reads, ‘THE ROBIN CUP for being Robin’.

We want to get to the point in our lives where we feel that we are enough. We should always do our best, of course, but the bottom line is, we are enough.

And once we truly believe that, then we’ll have the confidence to be ourselves.

Robin Kermode is one of Europe’s top communication coaches. He is the author of the best-selling book, Speak So Your Audience Will Listen and his podcast, The Art of Communication, now has over 50,000 listeners.

We can't believe it is already December, the past months have flown by in the salon! It is the season of sequins, glamour and glitz (all the things we love at Gustav Fouche!). We are ready for a busy month creating beautiful festive fabulosity and gorgeous party looks. In this month's newsletter we will be sharing some amazing trends for December and some fantastic local businesses (including some discount codes!). Let's sparkle!